Teck tree planting has transformed families' lives and opened their minds to reforestation.

The Bonding with Children Foundation sent me to Kuvé in May 2018 to help raise parent awareness about the importance of trees so they can instill that knowledge in their children. The need for reforestation was also a part of the mission. I taught the students in their classroom about the different parts of a tree, their role in our environment, and why one needed to plant trees. They enjoyed the lecture. As for their parents, we gathered them under a tree in the village square and presented to them the importance of trees and reforestation.

In response, on May 17th, 2018, the people of Kuvé chose to plant Teck trees along the roadsides that led to the village. 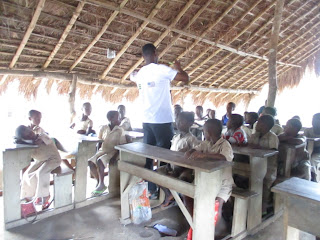 After several months, the organization sent the Vice-president back to do the follow-up on the project. It was awesome! The community had changed and some of the villagers expressed their happiness by suggesting to plant more trees. Others were even using the leaves of the trees to wrap vegetables. Excited parents testified: "Our children plant their own trees in the farms and name them after their names!" Though they didn't notice the increase of oxygen in the environment, they understood trees were needed in their surroundings. Neighboring villages had started to follow in their footprints. In the village, people planted not only Teck trees but also other important trees like palm trees. 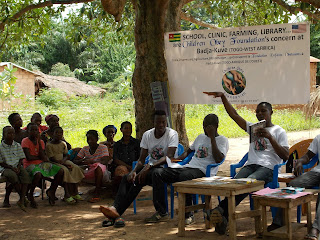 The people of Kuvé noticed that they were cutting down trees unnecessarily and sometimes just for firewood or charcoal. But now the inhabitants gave up those practices and have started to take good care of them. They made students water them. Before and during the dry season wild fire burned most trees. To avoid that, they sensitized people not to use fire for hunting. Some cleared surrounding trees so that wild fires did not reach them. New rules have been put in place to help protect forests in the area and encourage reforestation as there was no such awareness before. They never organized themselves to plant trees but their recent interest in planting trees encouraged Bonding with Children to plan a next move which was to found a nursery and reforestation club in the village.

The success of the Teck trees project in Kuvé has transformed families' life, and triggered reforestation in the community and beyond.

To Learn More about Bonding with Children
Visit our Website

To Invest in Our Mission
DONATE TODAY!

Popular posts from this blog

Water for the Kuvé Community 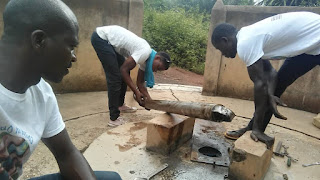 by Komlan Koudadje, Vice-President Bonding with Children Foundation Bringing water back to the Kuvé community is probably not the biggest challenge Bonding with Children Foundation ever faced but it still is a great accomplishment that warms our hearts. My name is Komlan. I'M 42 years old. In 2016, I met Victor at a Walmart in Des Moines, Iowa. Victor was a classmate of mine in high school. I was glad to see him again after 20 years.Together we decided to pool our resources and work on some projects as a nonprofit. Our very first project took us to Kuvé, a village of about 2,000 people. It was in May, 2018. Our team had received a warm welcome from the village chief popularly known as Togbé.  The chief gathered almost everyone in the village for the event.  Our presence there at that time was to distribute clothes and school supplies. Kids were smiling and jumping joyfully.  The Chief however expressed  his concern about the need of clean water and drinking water i
Read more